Alright, since its Wednesday and everyone I know is drinking in their respective offices, enjoy this Justice mix done exclusively for The Fader's 50th anniversary party...Its nasty...I realize you could just go there and get it but hey... 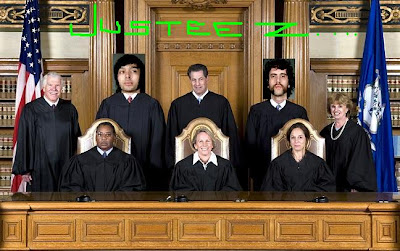 Justice - Sexclusive for The Fader 50
Posted by Clitoris Rex at 3:48 PM No comments:

This is genius...a clever video presentation by the B/D folks...possibly inspired by their recent Vis/Ed presentation? Who knows.
Enjoy and Happy Holidays.

Add to My Profile | More Videos
Posted by Clitoris Rex at 4:57 PM 1 comment:

Hot Chip - Made in the Dark

Album Review: Hot Chip - Made In the Dark 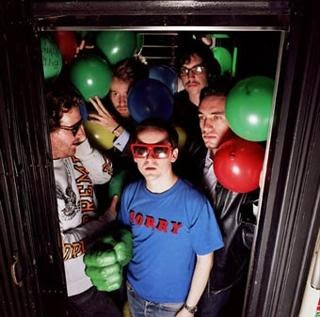 So I just got to interview Owen from Hot Chip (he is second from the center above, kind of looks like a member of new order...more on that later) about their new album "Made In the Dark". We had a great little conversation that will eventually end up in MetroPop magazine.

In natural preparation for the interview I spent the last couple days balls deep in the new album (due out next February) and it's fantastic. Its a huge spinning blender of all the elements that make Hot Chip interesting: UK garage, Prince-worship, charmingly bad musicianship, found sounds, roaring synths, hip-hop posturing, afro-beat (?), and the fantastic sequencing of dancing and subsequent chilling.

They've also done a better job of capturing their live sound. Hot Chip live shows sound nothing like their albums. A few songs on here fully capture the energy they pull off live...because they were recorded live. "Shake a Fist" opens up the album a complete ecstatic freakout that breaks down, stops, starts, and discos the fuck out into a huge party anthem. "One Pure Thought", with its lyrics based on simply being confused and scatterbrained, opens with a rhythm guitar lick so nice it sounds sampled (its not) and eventually devolves into a talking-heads type chanted rhythm session with Alexis coo-ing, "I'll help you on your way...there is nothing more to say". "Hold On" follows the same idea of the uni-rhythm, clipping along for six minutes of actual "jamming" until it becomes a toy percussion afrobeat thing, ending with the statement, "I'm only going to heaven if it tastes like caramel".

Its not all absurd fun though, the album slows down on shit like "we're looking for a lot of love", with its slow jam sensibility and blasts of tape hiss, and "made in the dark", the effortless title track about elements that just seem to come together on their own.

I don't know, Im crawling up my own ass here, but the album is great. It has everything you want from a Hot Chip record. Its flawed in only charming ways, and I think by the next record they will have perfected the "Hot Chip Sound". Which is fine because watching them change has been fucking fantastic. Finally, just listen to "Ready For the Floor". Its brilliant, pop damn music.
Ready for the Floor

Add to My Profile | More Videos

Also...the first time I saw them in person I thought they were some kind of fucked up supergroup...observe. 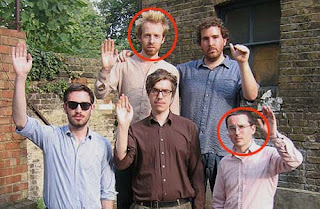 Owen - "The Joy Division One". Looks like a cross between Ian Curtis, Stephen Morris and...Buck 65... 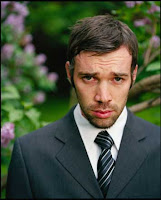 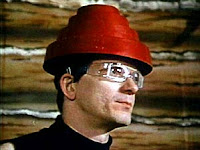 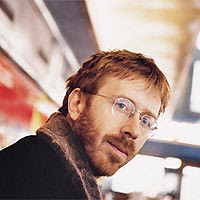 Joe - I couldn;t really place him...the best I could do is Shane Smith, co-founder of Vice magazine... 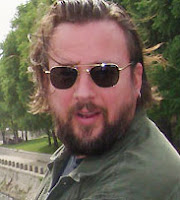 That took way too long...with minimal returns. Have a great day.

Posted by Clitoris Rex at 3:03 PM No comments: