The guys who sit next to me are now quality checking the backcatalogue of the band called Deicide. This means they have to listen to everything they have ever recorded ever. At blistering volumes through unbelievable speakers. The lyrics to the song they are playing now:

Bastard of the cross relentlessly
Strike fear preaching of his coming here
Scriptures, twisted words to provocate
Rapture from the lord your god so great

He fucked himself to save you - put to death, masochist
For this his word berate truth - agonized, prophecized
Revive the book of fiction - blasphemy, gluttony, to deceive you and me
In battled disposition - hang the bitch on the cross
Entitle his convictions - blasphemous, lunatic
your heart is full of hatred - BASTARDS DIE,
FUCK YOUR CHRIST, WILL SURVIVE,
KILL YOURSELF........DIE!!!!!!!!!!

Bastard, for your god you compromise
Do without, search the truth you'll never find
Scriptures offer little to relate
Laughter from the lord into your face

You think your god will save who - I will see, just believe
You fool, not true, no thank you - enemy of the cross
His word installs deception - pray to god, not for me,
for yourself, soon you'll see
You'll die for your religion - holy shit, pacifist
Untrue with choices given - nothing won, you are dead
Describe the holy vision - BLACKING OUT, FINAL BREATH, MEET WITH DEATH,
NOTHINGNESS, DIE!!!!!!!!!!!!!!!!!!!!!!!!!

This is what goes on where I work. I couldn't be happier.

They just started playing the classic, "Blame it on God". I really hope "This is hell we're in" is next.
Posted by Clitoris Rex at 12:20 PM No comments:

The last time I saw something this grimy...

...was when I saw those two kids whip the piss out of a bum on the train.

Posted by Clitoris Rex at 12:16 PM No comments: 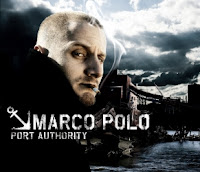 Rawkus? Yes I remember '99 too, but if they keep putting out records like this I might be able to let it go. A New Yorker by way of Canada, Marco's beats are all mini-epics, and damn near every MC on here steps up to make sure each one is utilized perfectly. Highlights come from Copywrite at the album's beginning, Large Professor, Kool G. Rap, Sadat X, Ed O.G., Buckshot in the middle, and J*Davey (whose singer has been giving me wood since "No More") in the end as a bonus. The real centerpiece of the album though, is "Nostalgia" with Masta Ace, a look back on NYC hip hop from a sunny day in Brooklyn. Check it out.


--So I wrote that review for Beautiful/Decay and sent it to Editor. We talked on IM briefly about it, and I mentioned that I couldn't get past the track with Masta Ace (I do that, I have a tendency to run a song straight into the ground). His response, "We're shooting a video for it next Sunday, we'll roll together".

The song is so dope. I'm a sucker for songs that have choruses comprised only of samples/scratching. Nothing can ruin a good underground hip hop song like a poorly sung/rapped chorus.

Anyway, I was lucky enough to be there, I got to meet/stand close to the "who's who" of the Brooklyn hip hop elite. Chip Fu from the Fu-Schnickens, Steele from Smif n Wessun (or Cocoa Brovaz), Grandaddy IU (Legend), Pumpkinhead (from Brooklyn Academy), Shabaam Saadiq, and more. If these names mean nothing to you, tough shit, do some homework. I was loving it, but I didn't expect to be in the damn video. 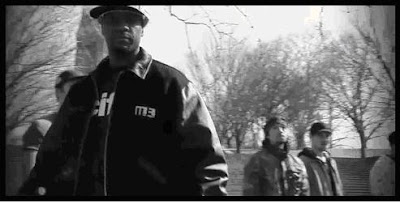 Ha, thats me on the far right, you can tell I'm about to crack a big stupid grin, because thats all I did all day there. The guy next to me is Saga, and he's cool as fuck.

I was there, unshaven and hungover, to help fill out the "posse cut", (the part where everyone is standing around the linoleum watching the dancers [the girls were fucking gorgeous], and the part on the steps) like i said, the "who's who" had their own section of the posse, I was in the "who's that?" section.

It was a great day. This is my favorite though, funny as hell... 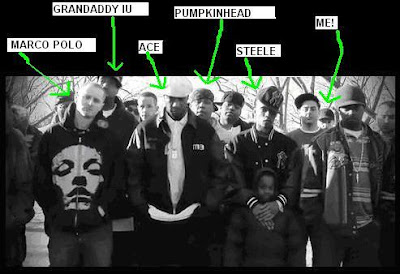 I'm off to a US weekly lunch with Ludacris and then some BET thing tonight. I'll let you know how that shit goes.
Posted by Clitoris Rex at 5:45 PM No comments:

EL-P (ft. Trent Reznor): "Flyentology"
From the album, I'll Sleep When You're Dead.

It's always the same with me and EL-P's music. It flies directly over my head at least three times before I catch some tiny detail that gets me on board. And once I am on board with EL-P shit, i am fuckin signed up. The rest of the album all of the sudden sounds 10 times better, hidden punchlines and shrapnel come clear through those dense-ass productions, and I become a member of the fucking fan club.

The whole album was all indiscriminate murk, anger, and breaks until I, with a drunk gorgeous girl hanging from my neck neck by her lips like a Remora with a nice ass, belted this chorus at the top of my lungs on Saturday night:

This song, quite literally, is about finding God in while your plane is going down. And it is genius, the crisis even has the man who once screamed, "God is Dead" to beg for salvation from a God he has forsaken many times, with evidence to prove it. If Reznor gets on his knees to become "His soldier", and Brooklyn cynic EL-P cracks open his seat-back bible when the Boeing wings get ripped off, I could believe that there truly are "No Atheists in a Foxhole".

Call me dense for missing all of this, I even saw the video and still didn't get it, but that's how it goes with me an EL-P music. I didn't like Fantastic Damage until I heard the Corporate resignation in his voice at the end of this line from "Stepfather Factory":

After i figured out what the fuck "Flyentology" was about (I'm fucking dense), I was able to hear the tiny but vicious "SON OF A BITCH" buried right before the second chorus in "Smithereens (Stop Cryin')". A tiny little orgasm for me that sent me digging for another brutal Easter Egg on the album.

The point is, go get the album...I mean...one track has fucking Cat Power on it too, and I am miles away from getting the meaning of that one...my audio boner (Cat Power is very attractive) keeps bumping into the track.


To hear the song, click the video link, its on that page. If you can't find, you stupid.
Posted by Clitoris Rex at 4:20 PM No comments:

This is what I was talking about. More Andre 3000, more Outkast, Gospel Choirs, Bun B, Pimp C, fucking UGK. My day just got made.
Posted by Clitoris Rex at 4:45 PM No comments: