OK OK OK. I know I do this a lot, but I've been Awol. I did a sick amount of writing gigs and did the whole CMJ thing, and I've been trying to differentiate my ass from my elbow ever since. Here you will find:
1. A piece I wrote for the inimitable New Pop in Connected Magazine
2. A few reviews I did for MetroPop magazine.
3. A video of the horrifyingly good Justice performance at Exit (Terminal 5) that almost lost me my girlfriend. Note the version of "We are your friends" hacked into Ministry's "Psalm 69". Genius. Sorry about the shaky video, I really only posted it for the audio...and no, that fool singing along to the samples is not me.
4. The newly released video for the live version of Daft Punk, "Harder Better Faster Stronger". Filmed live at that show in Brooklyn they did that changed my life. Yes. Changed my life.

You guys are pretty damn cool I tell you. Thanks. 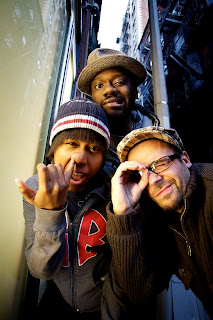 The NEW POP. It’s a play on pop art I suppose, but damn if they aren’t perfectly suited for our “Hey look at me I’m fuckin awesome” times. Not only are they set up to work within this culture of self-gratification, cool shoes, and egos, they are set to break new ground. NEW POP.

I’m getting ahead of myself. The NEW POP is a tight crew of New York City (all born and raised) artists and thinkers that are so driven it makes anyone standing near them say, “Damn I need to get my shit together”. There’s Trevz, the videographer, TONE, the photographer/videographer, and recent addition Texas, photographer and official NEW POP muse.

The NEW POP started as Trevz’ project, but evolved into its own after TONE joined, and became complete once Texas jumped on board. They are a family, and their shared blood is New York. It is their common love for that wild city that holds them together, inspires them.

What they do is documentation. They go out into the world and use a combination of video, photography, and music to create mini-documentaries that they post on their site, www.thenewpop.com. The format of one of their “episodes” is an examination of a theme (nightlife, graffiti, general NYC culture, streetwear, current events, music, etc.) set within a framework that fits short attention spans (episodes range from 3-9 minutes) but caters to the hard thinkers and big idea people alike.

On the surface, there’s a tendency to lump them in with the trend of “nightlife photography”, but NEW POP’s “art from art” is a little different than the half nekkid drunk folks on nightlife photo blogs. Sure they go out at night and capture people having a good time, but more importantly, The New Pop chases down genuine New York City culture, and celebrates the amazing things said culture can accomplish under the right conditions, nah, any conditions.

On a deeper level, there’s also a desire in their work for something larger, more substantive. In New York City right now, in the music and arts culture, egos are winning. The NEW POP are looking to balance things out a bit. In everything they do, there is a need for something more genuine, positive. More for the ‘whole’ and less for the ‘scene’…

So what’s next? Well, right now is a great time for The NEW POP. As the seasons change they are coming into their own so successfully, they couldn’t even stop if they tried. With the help of recently enlisted bad-ass Katie Longmyer (Good Peoples) handling their business development, The NEW POP has huge plans for ’08. I’m not saying their competition should be scared, I’m just saying they had better be ready to play catch up.

For my money, the best part about LCD Soundsystem’s music is that moment when it breaks past the point of “song” and heads into “freakout”. Where ol’ James Murphy pushes a song’s groove to its absolute peak and then sets it free, letting its own momentum carry to the end. The songs on this EP don’t really do that. The 45 minute Nike track is amazing and I am so glad they inserted track breaks, but the rest of the B-sides on this didn’t really grab me. I mean, I don’t really see the point of a “North American Scum” without the genius vocal, but its on here anyway. This is great for rabid fans/track stars, but if you really want an LCD EP, get the one with the John Cale version of “All my Friends”. Shiny.

This album is brilliant. Let’s put aside the shouts and hollers that “the Radiohead model is changing the music business” and just realize that this record is concise (Hail to the Thief was a little long for me), beautifully layered, simply directed, and balanced, in that there is enough wanky Thom Yorke glitches and quality ‘rocking’ to make everyone happy. I can’t asses it any further now; I’m too excited to experience this one in every possible state of mind: Staring at my eyelids with my headphones on, riding in a stolen car, sitting solemnly under my home speakers, playing it on sticky jukeboxes, and finally…hopefully…with my hands in the air at a show. See you there.


SONS AND DAUGHTERS – THIS GIFT

This is one of those bands I have trouble classifying because I never listened to this type of shit when my brain was soft. I’m sure if I listened to more PJ Harvey and less Norwegian black metal I would have more reference points. Anyway, this is good music. It’s a little dark, flashing a female Joy Division at random points…like if Ian Curtis’ wife was writing the songs and not him. Yet again it has high points, with tons of tambourines, angular rockabilly riffs, “na-na-na-na” chants, and all kinds of mutated Americana-via-Glasgow. This is the best music to come out of a barn in Scotland that I have heard all month.

Justice - We Are Your Friends (Live Psalm 69 Pigfuck Version)

Iron and Wine - The Shepherd's Dog 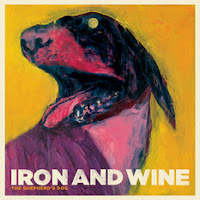 I'd like it to be a little louder but I am too comfortable to get up. This apartment is fantastic when it isn't filled with close friends, at the outset of fall time, when the cool air does the opposite of thawing and has yet to lose its novelty.

'Give me good legs, and a Japanese car', Sam Beam sings on peace beneath the city. I started this album in the middle by accident, but the second act is beautiful. I haven't spent much time in the south, but this is a perfectly romanticized version of it, good enough for me. A string of counties populated by naked people, stray dogs, buried riverside tragedies/casualties, overgrown land, and the ashes of a fire, where newborns are respected, and are just as likely to become elected officials as you are. Where its more acceptable to use the legs god gave you than some foreign made contraption.

That feedback noise running through the song is genius.

Its hard to believe that this is the same guy who once cooed "papa died sunday" at me through a wind tunnel of tape hiss over nothing more than his guitar and fingers. Yet on the other side of the (boy with a) coin its not so hard to believe. Sam Beam's music always sounded like breathing to me. Literally and figuratively, he has always given himself plenty of breathing room, deeper space to fill as he continued a music career that sounds more like a gravel accident than any sort of theologic plot. "The Song of the Shepherd's Dog" is pushed to the point of scratching dub. Literal dub music, with its Talking Heads rhythm, echoing itself back and forth from the upbeat to the down, screwed and chopped honky tonk to reggae to a fadeout that rivals Metallica's "One" for leaving me screaming (whispering) "need more."

They will also tell you that "The Devil Never Sleeps" is "Iron and Wine Rocking Out", they are right, but he could cover "Raining Blood" through a stack of broken Marshall stacks and it would still be anchored by that wonderful plodding rhythm and cool religious gait. So I suppose it depends on your definition of "rocking out".

The production values are higher, and the sound is thicker, which is where I had my first memorable experience with Sam Beam. The track "Trapeze Swinger" sounds like the pilot episode for The Shepherds Dog. Seriously, watch the entire film "In Good Company", just to hear that song come in in the last 30 seconds to validate the last 90 minutes.

So it is, thicker, it is fatter, but its still Iron and Wine. Everything you liked about him is still here, the rhythm, the air, and the thoughtful writing. These ideas are just expanded upon, each taken to their logical next step. I trust Sam Beam. He will never lead me astray, he's a family man, for God's sake.
Posted by Clitoris Rex at 10:51 PM 3 comments:

So my good friend Ryan West (the man who gave me first experience setting up a live show, which ended in a blacked out noise-hoedown on stage) set up an amazing site devoted to zombie stories. Seriously, thats all thats on there.

He just emailed me the other day to let me know my story "Untitled" won second place in his first writing contest. Check it out here.

Im not even mad about second, the first place story was pretty damn good, mine had more swearing though so thats cool. Anyway, enjoy.

Have a good night.
Posted by Clitoris Rex at 5:04 PM No comments: