So I went to the Bjork show at Radio City last night.

I'm not the hugest Bjork fan (Joey, you know this you wanky twat), Bjork fans all seem to have this connection to her music that's all "mystical" and "ethereal" meaning they did mushrooms in their older brothers college dorm room and bugged out to Vespertine, or their shuffle accidentally found something off of Homogenic while they were stoned on some "super heady Kind Buds" or going through a break up, or whatever...I digress into negative territory, I don't dislike Bjork so much as the utterances from the people who listen to it. We'll leave it at that.

BUT, I like good beats, and Bjork always kills it in that department (the appearance of Lightning Bolt's drummer and Timbaland on her new album can verify this) so i figured I would dig around for those hard to find tickets and check it out with my Bjork-fan roommate, his Bjork-fan girlfriend, and our indifferent friend Albert. It was worth it, for a few reasons.

1. She's adorable. Painfully so. She rolls her R's so they sound like the beating of dragonfly wings, and she should get a trophy for "cutest utterance of the phrase 'thank you' in the last 400 years". I didn't so much want to sleep with her as hang her from a mobile above my bed and have her tell me stories while I used her for warm fuzzy target practice.

2. Getting to see what Antony from Antony and the Johnsons looks like in person. The guy has the most bizarre voice ever, he sounds like a wavering drag queen singing hyper-emotive opera recorded on warped tape. So there's no telling what he looks like. Turns out, he's massive. An oafish, shy type, he came out wearing a huge black tablecloth to du-it with Bjork on "Dull Flame of Desire". Short cute Bjork, and awkward, towering Antony looked like the main characters in a Disney movie. I kept expecting Bjork to jump on his shoulders and ride off to beat up neighborhood bullies.

3. The Beats! Oh those beats. Mark Bell and Damien Taylor manned the electronics and laptop rigs, the highlight of the show. I could give a fuck what Bjork was saying as long as I could hear shit like that ringing through Radio City's perfect acoustics.

They were also manning some needlessly lit up and amazing looking instruments, I don't know what they were, but they looked like if you turned that motorcycle game from Tron into a synthesizer.

4. "Army Of Me". That song is gnarly as FUCK. I never realized it before, but it is positively devastating how good it is. Check the Tank Girl soundtrack and the Helmet cover for verification.

5. "Pluto". Some song of hers that I've never heard before, probably will never sound that great ever again, album or otherwise. The 4/4 rave thump, the lasers, and the assholes waving their glow-in-the-dark drink stirrers around gave me an Ecstasy flashback.

6. She sings just as well live as she does recorded.

7. "Declare Independence". This is a song off the new album, and it is probably the only song I will admit to liking outright. Its noisy as fuck, she doesn't even sing, she just screams about 'raising your flag' and 'don't let them do that to you!', just a few BPMs from being a brutal dutch hardcore track. Shit, this guy might as well have produced it.

8. It was short. Wanky musicians tend to spend their time coating your face with three hours of their own self indulgence. Not the Bjork, we got an hour and ten minutes. PERFECT.

It was a good show, I had a great time. I won't say I'm a bjork fan because if I did then I wouldn't get to talk shit to the next guy who says he is "Venus as a Boy" in his myspace profile, that shit is just uncalled for, but I can say I had a good time.

After that I went to the Korrupt party at Hiro ballroom to say hello to some people, and then left early because I am sick and needed orgasm-therapy.

More pics from the show once my roommate gets them to me.
Posted by Clitoris Rex at 11:51 AM 2 comments:

The greatest time for music: Summer. Not necessarily the best for new releases, but if you put on a good record at noon on a lightly-hungover Saturday, windows open with a nice couch or a few deck chairs on your porch, the vibe and the music will be inseparable. Forever. 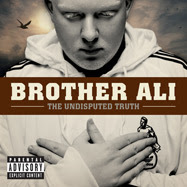 Brother Ali: The Undisputed Truth.
Check out "Daylight" for starters: Good Ant beats just have 'Summer' written all over them, but when he takes those 80's plucked guitars and Bobby Brown horn blasts and somehow turns them into something gorgeous its quite enough, but with Ali's sunny day lyrics about "lettin' the dark side slide right on out" its a blow job and a hand job and a good wheat beer all rolled into one.

J Dilla: Ruff Draft.
"Nothing like this" is the perfect soundtrack for a slightly stoned and fuzzy 3pm when you are wandering around your domecile in your flip-flops, casually grooving through your cupboards looking for awesome salsa to accompany cheap tortilla chips and your cell phone on your porch/fire escape/deck/front step/stoop/concrete slab (for my Queens people). 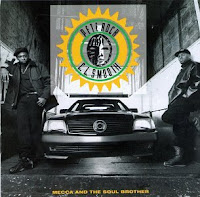 Pete Rock and CL Smooth: Mecca and the Soul Brother.
All of it, just push play and get a fresh change of shorts ready for when "They Reminisce Over You (T.R.O.Y)" comes on.

The Band: The Last Waltz.
This is for when it gets a little later in the afternoon and you are questioning whether or not A) you should keep it up with your all day buzz, or B) buckle down for a nap on the couch. If you have the DVD of this show, the answer is B. If you only have the CD, the answer is A. Call up some people and get out the Yahtzee. Either way, you win. 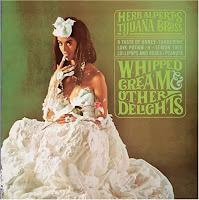 Herb Alpert: Any-fucking-thing.
This man's music could cure any psychosis, especially the kind called Seasonal Affective Disorder. In fact, this music is not season-specific, its just the greatest music ever put to tape, so of course it would sound amazing during the summer. I would recommend it for the mornings, and for paper-lantern backyard barbecues. If you want to go ironic with it, blast this the next time you try some weird acrobatic sex position. Try not to crack the fuck up when "A Spanish Flea" comes on, i DARE you.

Thats probably good for now, theres more, but I will get at this later. Have a great day.
Posted by Clitoris Rex at 11:36 AM